At Little Giant Ladders, we aren’t driven by the number of ladders we build, but by the individuals who use them – the hard-working men and women of Australia who are the backbone of industry and progress. They put their lives at risk to make things happen. In an era of progress and innovation, the traditional designs by most ladder companies are virtually unchanged. Unfortunately, ladder injuries have increased by 50% in the last decade, so the ladder industry needs to do better. We are leading the charge by supplying the safest ladders in Australia. We believe it’s better to build a fence at the top of a cliff than park an ambulance at the bottom.

We’ve developed a new range of access equipment with numerous features and safeguards that combat the common misuses of ladders. We’ve taken the next step in climbing safety by creating products engineered to protect the users, with ladder designs that account for human behaviour.

It first started with the Classic, but the range has grown rapidly and now includes access equipment for homeowners and professional tradesmen. Ladders such as the Xtreme®, Select Step, Safeframe, Aerial Safety Cage & the SumoStance all feature as part of our extensive range. Little Giant is becoming one of the world’s most recognised ladder companies and is sold in more than 50 countries globally. Australia, here we come……and we are just getting started!

Every rivet, every weld, every rung & every person matters!

Now in Australia, Little Giant Ladders Australia will ship your order to any location in Australia for free. You can also choose to pay securely with PayPal, Credit Card or AfterPay.

The Little Giant Xtreme is the strongest, safest and most versatile ladder in the world.

Read more about the Xtreme®

In the 1970s, Harold “Hal” Wing, met a German painter who had an interesting idea and a primitive prototype of a new kind of ladder. Hal enhanced the ladder and engineered what is now known as the strongest, safest, most versatile ladder in the world® – the Little Giant Ladder System®.

This professional-grade, multi-use ladder system can be set up in 24 different positions and is probably the most famous ladder in the world. Hal performed demonstrations of the ladder nationwide at state fairs and trade shows, building and packaging orders out of his garage. Gradually, both the do-it-yourselfers and professionals began to understand the Little Giant Ladder System was the best ladder in the world. 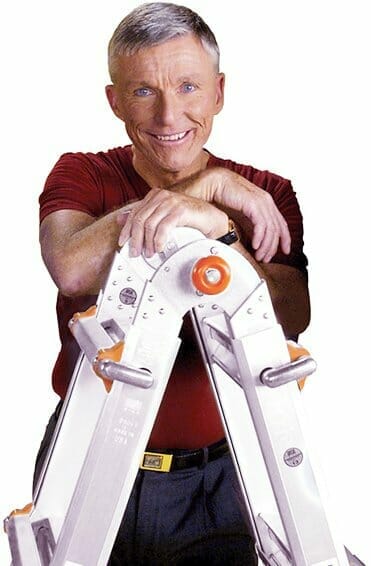